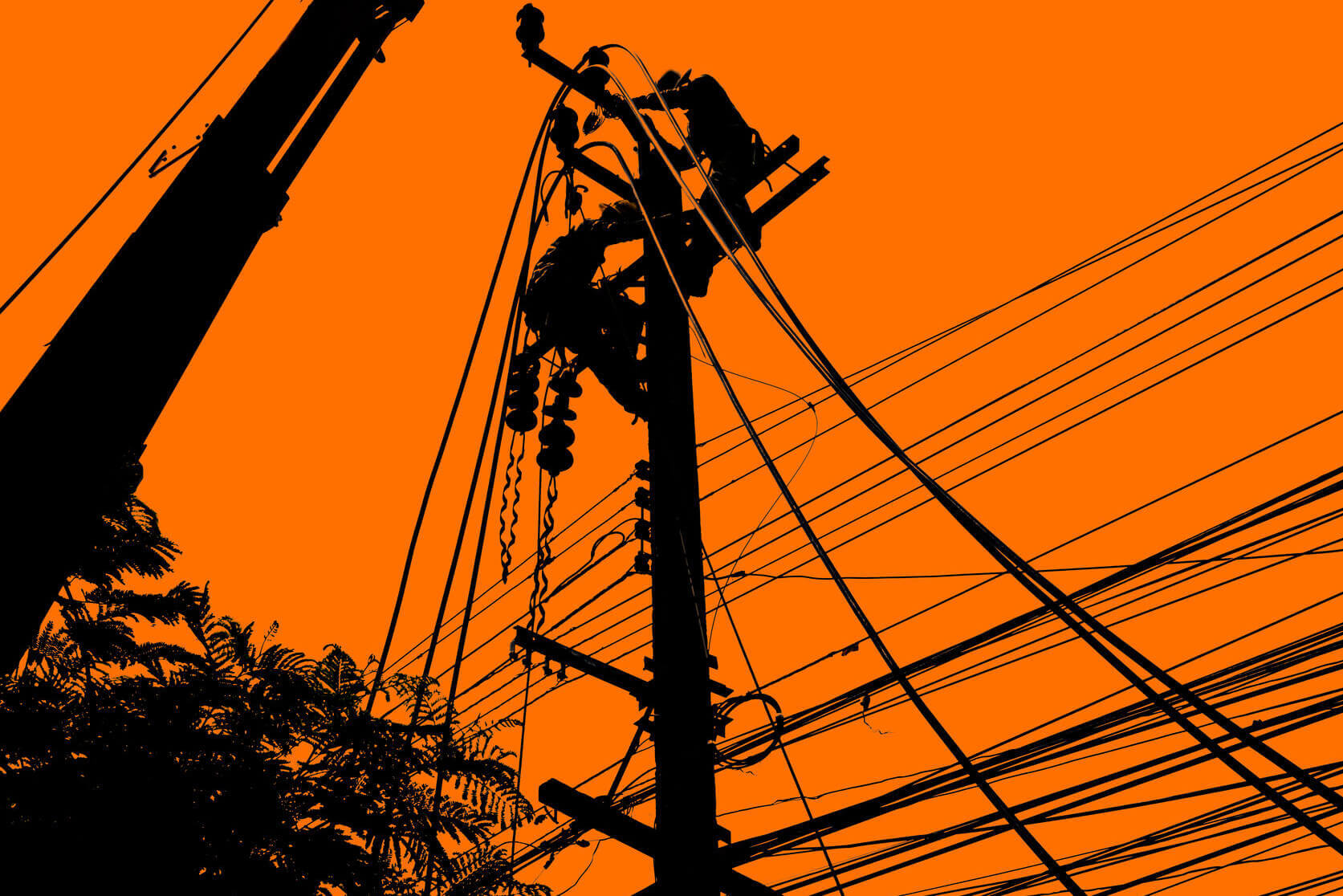 The lineman occupation began with the widespread use of the telegraph in the 1840s. Telegraph lines could be strung on trees, but wooden poles were quickly adopted as the method of choice. The term ‘lineman’ was used for those who set wooden poles and strung the wire. The term continued in use with the invention of the telephone in the 1870s and the beginnings of electrification in the 1890s.

This new electrical power work proved to be much more dangerous than telegraph or telephone work because of the risk of electrocution. Between the 1890s and the 1930s, line work was considered one of the most dangerous professions in existence. Approximately 1 in 3 linemen were killed on the job, mostly from electrocution. This led to the formation of labor organizations to represent the workers and advocate for their safety. The most important of these labor organizations in the United States, still in existence today, is the International Brotherhood of Electrical Workers. This also led to the establishment of apprenticeship programs and the establishment of more stringent safety standards, starting in the late 1930s.

Better tools and protective equipment were produced as the occupation grew and safety became a primary concern. Some early equipment shows remarkable ingenuity even though it often provided only minimal protection. For instance, the orange-colored covering linemen place on high-voltage lines is called hose, which recalls the earlier use of sections of ordinary garden hose for the same purpose.

Electrification and The “Boomers”

In the United States, the rural electrification drive during the New Deal led to a wide expansion in the number of jobs in the electric power industry. Many power linemen during that period traveled around the country following jobs as they became available in tower construction, substation construction, and wire stringing. These roving workers or “boomers” as they were called, were known as rowdy risk-takers but also as hard workers with a strong sense of pride in their work.

Boomers often lived in temporary camps set up near the project they were working on, or in boarding houses if the work was in a town or city. The occupation was one of the most lucrative at the time, owing to the high level of skill needed and the hazardous nature of the work, but the hazards and the extensive travel limited the appeal of the work to only a hardy few. Often a lineman would finish one job with enough money to live on for several weeks or months before they would “boom out” to another job somewhere else.

A brief drive to electrify some railroads on the East Coast of the U.S. led to the development of a highly specialized branch of linemen who installed and maintained catenary overhead lines. Growth in this branch of linework stalled after most railroads chose to replace their steam engines with diesel.

The job changed throughout the 1940s and 1950s. As the public became more dependent on electricity, it became imperative that damaged power lines be repaired quickly. This led to an increase in the number of linemen needed to maintain power distribution circuits, and to keep them repaired in case of power outages, storms, or other emergencies. These maintenance linemen mostly stayed in one place and could settle down, although sometimes linemen could be called to travel to other states to help repair the damage from major storms such as hurricanes. Also during the 1950s, some electric lines began to be installed in underground tunnels, expanding the scope of the work.

Today, most electrical linemen work for utility companies, power line construction firms, the government or as electrical contractors. The conditions are still hazardous, but safety standards and equipment have continued to improve over time. Although it is no longer as dangerous as it was in the past, line work is still a hazardous career. As a result, the median income for a lineman in 2017 was $69,380, with many earning higher wages than that. The job market has grown and will continue to grow as demand for new power line installation for new construction continues, adding around 16,800 jobs over the next decade. The future for linemen is bright, and every day they will continue to bring power to our country’s homes and businesses.